A Mediaeval Feast in Essex

I stupidly decided to cook a mediaeval feast to celebrate New Year’s Eve with some friends. I say ‘stupidly’ not because it wasn’t a success but because the amount of work and fiddly techniques nearly killed me!

I wanted to do something similar to one of the courses of Richard’s coronation feast, so about 15-20 dishes, mixed sweet and savoury. I had tasted some mediaeval recipes while at Middleham in July and loved the different tastes and rich flavours, so I bought the recipe book the dishes had come from. This was ‘The Medieval Cookbook: Feast for the King, compiled by Patricia Rice-Jones. I also had another book, The Medieval Cookbook by Maggie Black

I chose a variety of recipes and created the following menu:

Obviously, one person (me) would not be able to cook all this in one day, so I began early and started with the sugared almonds, crystallised ginger and mixed pickles. The recipes were not difficult, but very fiddly and time-consuming as they were all done from scratch. There were often several processes to go through for each dish. Even the sugared almonds required you to painstakingly add a tablespoon of sugared water to the almonds in a pan and jiggle them about over the heat until dry – several times over! The vegetables and apple for the pickle had to be hand peeled and sliced before the process started.

I then made some stocks to freeze for several of the recipes, made from lamb and chicken bones. With the lamb stock, I made the venison stew – I did it in the slow cooker and the smell was fantastic! Not so when I tasted it! The unfamiliar herbs I had used (hyssop and savory) were extremely bitter and the stew tasted horrible. Knowing I could not serve this concoction as it was, I added honey, red wine and cranberries. Phew! It was delicious. I let it cool and froze it. Here is the finished dish, served in bread trenchers with a slice of frumenty. 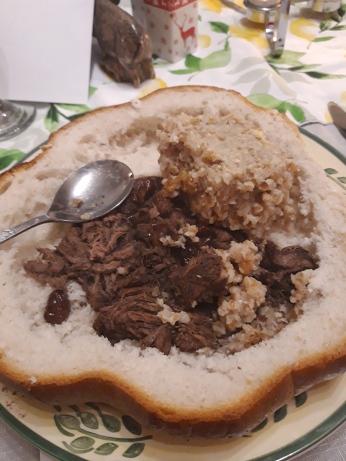 The next cooking session involved pastries. I made figs in coffins and the chicken pasties with ready rolled pastry (I’m not a complete idiot!) and froze them to cook on the day. Then I made the ‘Grete Pye’. This was formed of a layer of minced beef with suet and spices. Then a layer of game meat, a layer of chopped dates and prunes with spices and finally another layer of minced beef. I made a pastry rose design to decorate it (of course!). Here are the figs in coffins and Grete Pye: 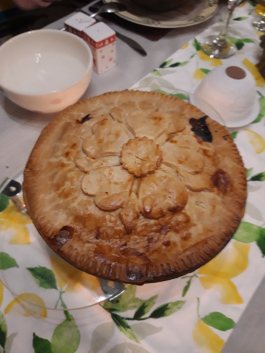 Over the next couple of weeks, I cooked various dishes which could be made in advance, such as the wine sauce for the salmon and the chicken (which would later be crowned with eggs). These are the finished dishes:

The day before, I spent most of the day preparing and cooking, in particular the Leche Solace (a sort of blancmange) and the Geli Partied with a Device had to be allowed to set in the fridge and the orange segments were marinated in honey and spices. The pictures here are of the Leche Solace and the baked orange served in the halved peel.

I will relate the procedure to make the Geli to show you how elaborate and intricate some of the processes were. This jelly was made with a bottle of fruity, white wine and a pound of sugar, some cinnamon, nutmeg and fresh ginger. After simmering for about ten minutes, it is cooled for three to four hours, then strained through muslin lined with coarsely-ground almonds. Milk is added and it is then strained several times through muslin until it clears (I gave up after six times – it would have to do!). Gelatin, dissolved in water, is added to the reheated wine mixture and stirred until dissolved. White rose petals were placed in the dish and the mixture poured over and left to set – I had picked the last white rose from my garden in November and frozen it. I had one leaf and I arranged it with some of the petals on the top once it had set. For me it was the most delicious item. Here is a photo of it.

Geli Partied with a Device

On the day, New Year’s Eve, I was still cooking. I reheated the venison stew in the slow cooker, made the frumenty and Lombard slices, roasted the salmon and baked the frozen pastries. The sauce for the salmon had to be reheated and the pears had to be peeled and poached and the oranges baked. I made the dough for the fritters from scratch and left them to rise. Trying to time all of this was an absolute nightmare! 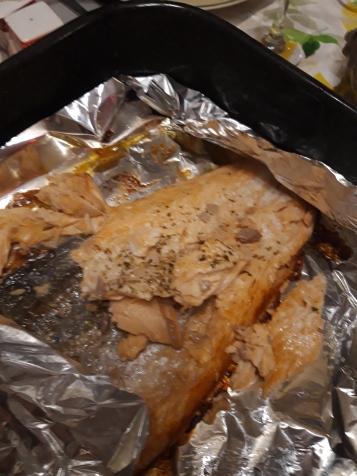 However, the feast was a great success, all except the sautéed lamprey, which was disgusting – we all tried one small piece and gave the rest to the dogs. There was so much food, I didn’t bother to cook the fritters until late in the evening, as no-one had enough room to eat any! The fritters and lamprey are pictured below. 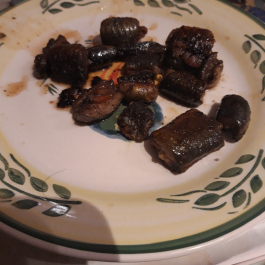 The feast was finished off with a gingerbread ‘subtletie’ of a York Rose with gold leaf centre. I also made Hippocras (spiced wine) and served Lindisfarne mead.

My guests entered into the spirit by dressing up. All in all, it was a great success but I will never voluntarily make a mediaeval feast again, although I may well make some of the individual dishes and I have already used some of the more unusual spices that I don’t normally use.