Archive for the tag “Ipswich”

An unusual witchcraft case in Ipswich

Mary Lackland, or Lakeland, was burned on the Cornhill on 9th September 1645 but why? The heresy laws had been repealed in 1558/9 although they were invoked later, up to 1612/3.

This execution took place at the peak of the Matthew Hopkins witch mania but those convicted of witchcraft under English law, unlike Scotland and the continent, were routinely hanged – which was not just far more comfortable for the convict but makes life easier for scientists and historians today who can analyse bones.

About twelve years ago, I attended a talk at the University of Essex by that institution’s Professor Alison Rowlands, in which she spoke about evidence towards the identification of the St. Osyth witches, before Hopkins’ time. Hopkins himself, son of a vicar of Framlingham and Great Wenham, only lived from c.1620 to 1647 but, coinciding with the legal vacuum of the Civil War, procured the hanging of three hundred people from 1644, as well as some who died awaiting execution.

A good comparison would be the case of Margery Jourdemayne, which John Ashdown-Hill related on pp.66-8 of his Royal Marriage Secrets, who sought to foretell the future of Henry VI, for the benefit of his aunt by marriage, Eleanor Cobham. Jourdemayne was burned in 1441, and her male conspirator drawn, hanged and quartered, because this form of witchcraft amounted to high treason. There is no record of Jourdemayne predictng her own end. Other forms of treason, for which female commoners could be executed by burning in England and Wales until just over two centuries ago included the forging of coins, which bore the monarch’s face, or the killing of a husband, or a master or mistress by a servant, as such a person was considered to be a representative of the monarch.

So it was this definition of treason, together with the Witchcraft Act of 1604, under which Mary Lackland was to suffer, as the five or more people she was deemed to have killed by magic included her husband John, a barber. Although executed on the Cornhill, she is said to haunt the Buttermarket, including the Ancient House, now occupied by … Lakeland Plastics.

So where exactly was Holy Trinity Priory? 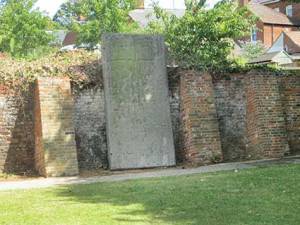 This rather interesting article shows that it was in the south-eastern part of Christchurch Park, possibly exactly under the Mansion? The “Withypoll slab” of Tournai marble, which seems to lie near the back gardens of Bolton Lane, may be a significant clue – note how Edmund Withypoll behaved rather like the Stanleys against the Harringtons in his dealings with William Dandy or Daundy. It also explains why St. Margaret’s Church was constructed as a chapel of relief (overflow) to the Norman era Priory, which was then demolished or superseded. 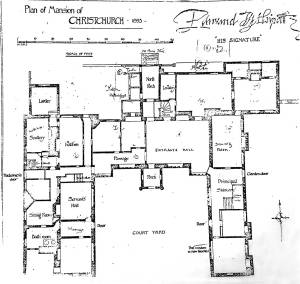 Thanks also to the late John Blatchly and to Sir Diarmaid MacCullough for their 1977 research. There is a July 2019 update as well, from Ipswich Borough Council.

Basil Brown’s work at Sutton Hoo, on secondment from Ipswich Museum, began in summer 1938 and reached “Mound One” today in 1939. In time, he explored the many mounds on that site, one of which probably includes the remains of Raedwald, King of East Anglia to about 624 and Bretwalda of England from 616. Raedwald, of the Wuffing dynasty, was a Christian convert and his collateral descendants fed into the House of Wessex and their successors from 1154.

Here are some pictures from The Cricketers, Ipswich, about Raedwald, his family and his times:

In early medieval times, ‘the staple’ meant England’s staple export: wool. But it was inconvenient and inefficient for the king’s men to collect the customs duties that were payable on the exported wool from every one of the hundreds of little English ports all around the country. London, Bristol, Ipswich and Sandwich were major ports but little ships could sail from any small harbour or river estuary. Therefore, since wherever the ships had sailed from, they were all taking their cargo of wool to Flanders (modern day Belgium and north-east France), it was easier to collect the customs when they arrived at their destination. In 1313, Edward II ordained that all merchants had to land their ‘staple’ at a port he would designate. During the Hundred Years War, England acquired Calais from the French and from the mid-fifteenth century until 1558 this port became the convenient Calais Staple, where customs duties were collected on all English wool exports.

From “A Year in the Life of Medieval England” by Toni Mount.

We will be going to: Colchester (for a talk), Thetford, Rayleigh or the Essex Hadleigh, Stoke by Nayland and Ipswich for the AGM

So where exactly is “Orwell”?

Harwich Town station is the end of the line, a twenty-five minute ride from Manningtree and the north-eastern extremity of Essex. As you cross the main road from the station car park, turning left takes you past a series of old buildings with Harwich Society plaques amid a modern setting. Some of these commemorate people such as Pepys, Christopher Newport the Jamestown settler and Christopher Jones, of Mayflower fame but the first of these is the site of the inn known as The Three Cups (left). Eventually, you will reach the Ha’penny Pier, from which the busy Port of Felixstowe is visible. Indeed, a passenger ferry across the rivers operates on most summer days. 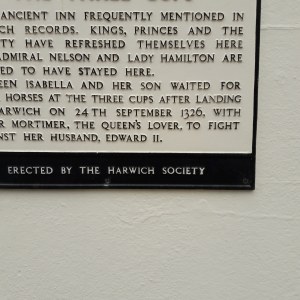 Harwich is situated on the south bank of the confluence of the rivers Stour and Orwell. Between them lies the Shotley peninsula, which also features the village of Holbrook. Warner (Edward II, The Unconventional King, p.216)…

is about the village just a few miles from Ipswich town centre, including the rather splendid mediaeval St. Mary’s Church (left) with about sixty angels on the hammer-beam roof, wall paintings, a more recent tower and a cenotaph. Grundisburgh Hall is not far away, as is Alice Driver Road, named after the 1558 martyr that the article omits to mention.

Every Wednesday and Friday during the summer holidays, these walking tours

are coming to Ipswich. They are aimed at accompanied children from 7 to 12, although younger ones are welcome. They start at the Tourist Information Centre at 10:30* and last ninety minutes for £3. On the left, is a haunted image of Christchurch Mansion.

The Court of Requests and Thomas Seckford

In 1484, King Richard III created a minor equity court to deal with minor disputes in equity; these are disputes where the harshness of common law would be acknowledged by those appointed by the Crown. Equity courts were mostly seen as the Lord Chancellor’s remit, and the split of the Chancery Courts from the Curia Regis happened in the mid-fourteenth century. By the time of King Richard III, the Chancery Court had become backlogged from cases pleading the harshness of the common law, and the Court of Requests was no doubt and attempt to remove minor equity cases from the backlog and free up court time – Richard’s attempt at reducing bureaucracy and better administration.

So successful was the Court of Requests that it survived Richard’s reign, and was formalised by the Privy Council of Henry “Tudor”, the usurper. It was a popular court, because the cost of cases was…

The latest issue of the Mid Anglia Group newsletter can be found here: